Until 1951, the farmstead was located across the street. A fire then damaged all the buildings, so that a new farmstead was built in 1952.

At that time the farm had an agricultural area of about 40ha and a livestock of about 10 cows with offspring and oxen, as well as 10 breeding sows, which were kept in a closed system.

The farm was managed in this way until 1972, with only small increases, and only then did it begin to grow in area and livestock.

Today, our farm cultivates around 800 hectares of arable land and has over 1900 pig and 330 bull fattening places. For 30 years, the use and expansion of renewable energies in the form of wind power and photovoltaics has played a central role for us.

Learn about the history of Hof Sandering, which began in 1952.

1950
1952
The beginning
Construction of the first farmstead 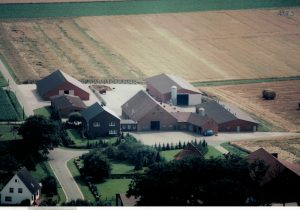 Construction of the farmstead with residential house, barn, cattle and pigsty by Erika and Fritz Sandering

The bull fattening is extended to now 400 places

New construction of a pig fattening house with 700 places

Friedrich Sandering passes his training as a master farmer

1982
The foundation of the family business
Friedrich Sandering founds

A new warehouse for 2000 tons of potatoes is built

The business is growing. We build a second and larger warehouse with space for 7000 tons of potatoes

The construction of a wind turbine (Enercon E-40 / 500 KW) is the first step into a clean future.

We are building another hall for storage and sorting of potatoes with 7000 tons of storage space.

A new barn with 1450 places expands our pig farm

New construction of our first photovoltaic plant with 130 KWp

Extension of the photovoltaic plant to 260 KWp

New construction of a potato storage hall of 4000 t. and sorting equipment as well as potato washing and staff rooms

We are expanding the photovoltaic system to around 600 KWp

Dirk Sandering passes his training to become a master farmer

Reconstruction/renovation of the pigsty

Conversion of the pig fattening unit to animal welfare standards

In terms of energy, the farm is also moving towards healthy energy production